Usually when my husband says “Get a bid” what he means is, “ask a professional what they would charge so I can decide to do it myself because I don’t want to pay to have work done.” Some things are worth paying for. Things that require specialty equipment or things that might wreck a marriage such as plumbing. I am also a fan of paying for things that are dangerous, such as removing big trees. My husband for some reason doesn’t find that dangerous.

After getting a quote from a logger we decided to take things into our own hands. We had a paddock that I wanted to clear. Eventually my horse will live in this paddock but in the mean time it would be a handy place to trap the alpacas so they can get sheared. (Running around twenty acres with a pair of clippers does not sound fun.) This paddock, of course, was covered with trees, some of them quite large.

Getting the trees down was not the issue. That’s why the chainsaw was created. Stumps. Stumps are a huge issue. In this particular case, for this paddock, which is approximately one hundred by one hundred feet, I planned to use it as a winter turn out for my horse so it would have gravel and sand for mud free footing. We decided that we would cut the stumps flush with the ground since they would eventually be covered with gravel and sand. Except my husband had an idea. A stump removal idea.

After we discussed the idea, and I said, “Wait. Will that acually work?” we decided to find out. Climbing the tree and hooking a chain around it and attaching the other end of chain to the back of a truck we would simply pull the tree out of the ground. Luckily we have a crazy neighbor who thought this was a great idea. He drove the truck and also climbed the trees. Because why not.

It turns out that not all of the trees wanted to give up their roots and move. About one third of the trees popped right out of the ground. The rest either broke, snapped near the chain or got the chainsaw because they weren’t budging.

This is a tree that ended up needing to be chainsawed. Since the chain was still wrapped around it we drug it with the truck to the cutting deck. Because why not. It took a couple of weekends to remove all of the trees (about thirty total) in the paddock, create a cutting deck and cut them for firewood. It took another day to cut any stumps flush with the ground, not an easy task because if a chainsaw touches dirt, well…you get cursing.

All of the branches and tops of the trees were moved with the tractor to a burn pile nearby. When the weather cooperated we burned the pile. We waited a couple of months and the pile dried out a bit, a leaf blower and some diesel gas helped get the fire started, the tractor kept it going. I am not recommending you drive a tractor into a fire. I think it is dangerous. My husband drove it into the fire because why not. It’s a guy thing.

The burn pile eventually smoldered down to nothing. But it had to get really HOT first. When it cooled completely I spread the charcoal on a nearby field. I planted grass on the paddock to keep it from growing weeds, the free ranging alpacas keep the grass mowed. Eventually I will fence the area and make it mud free. 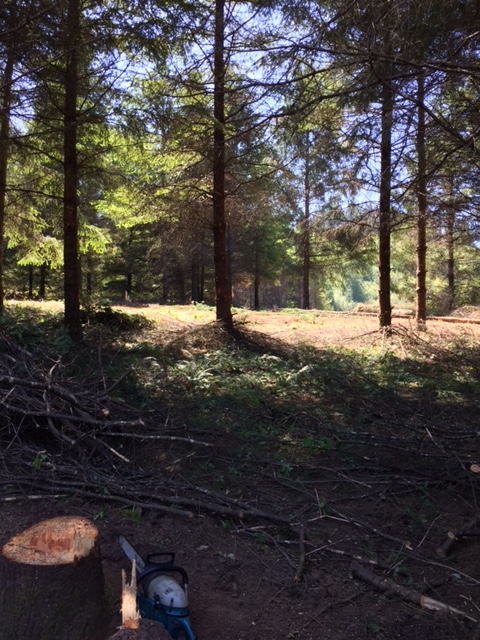